skip to main | skip to sidebar

And now for something a bit different...

Sorry, but I'll have to interrupt the flow of my posts. Something has come up...
Earlier this week I attended the high-octane "Launch Silicon Valley" event. The keynote speaker was Dan Roam, the author of "The Back of the Napkin" (recommended reading!). Dan recommends to try and describe our apparently most-complex problems as simple drawings. To make his point, he challenged the audience to develop a simple picture to describe the Administration's Stimulus Plan--the $787-billion (see also here) American Recovery and Reinvestment Act of 2009 (or ARRA).
Well, I promised Dan that I would take on this challenge; and, of course, I'd like to deliver on it as soon as possible. So today I'd like to share with you my first pass.

In political economics, there have to be multiple representations for the same idea; ARRA is no exception. So let's provide two perspectives--let's just pick some random names, and call them the RED view and the BLUE view. 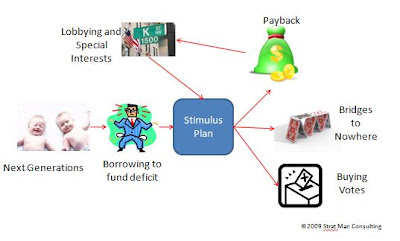 In this view, the essence of of the plan is the creation of unprecedented budget deficits, which we will finance through huge borrowing--from China and ultimately from the next generations of Americans.

With lots of $$$ in the hands of politicians, the stimulus plan becomes a magnet for lobbying and special-interest groups, which drive the stimulus plan to spend the money on pet projects with little economic rationale; that is, except for the rationale of benefiting the special interest groups and generally advancing the re-election potential of the various politicians. 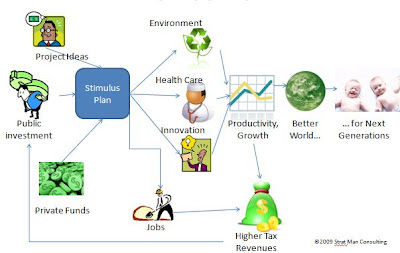 In this view, the stimulus plan still calls for major public investment--but that investment serves as a magnet for creative project ideas and attracts otherwise-frozen private funds (required to match and benefit from stimulus funds).

The projects funded by ARRA aim to meet the economy's near-term needs (creating jobs through "shovel-ready" projects); but they also are tailored to
meet our long-term needs, by advancing Clean Technology, Health Care, and Innovation. These initiatives ultimately result in

Which View Is Right?

Both have some merit.

As an economist, I would always be skeptical about approaches which place unprecedented levels of funding and decision-making power in the hands of politicians and government officials (as well-meaning as they may be). And the bond market is telling us that it's getting harder to finance our national debt.

But, as someone very close to a lot of cleantech innovation, I can clearly see that ARRA is doing a great job of attracting creativity and some private funding. Even if some of the resource-allocation decisions of the various government agencies may be off, there's great potential to jump-start excellent initiatives in the cleantech and health-case spaces. Those, in turn, would create terrific infrastructure for future productivity and growth.

So there you have it. There IS a way to depict the stimulus plan in simple pictures (not just in narrative and tables). And then there's another way... and another... and another...
Posted by IddoH at 7:17 PM

Iddo Hadar is the founder and president of Strat Man Consulting, a management consulting firm focused on helping cleantech companies and investors improve their ROI. He also lectures on business strategy, decision-making, and the future of cleantech at Stanford University.
Iddo Hadar has more than twenty years of strategy experience in many segments of the high tech industry. His experience combines industry and consulting work in restructuring, technology strategy, marketing strategy, and strategic investment. In his current and previous roles in corporate strategy and business development, he has worked on a broad range of strategic, economic, and technological initiatives.
As the leading strategy executive at Applied Materials, Mr. Hadar played a key role in redefining the company's vision, mission, and strategies, and in driving its entry into the clean energy space. He has been a leading spokesperson in the semiconductor industry in the areas of economics, productivity, and technological change. He also worked on strategies for water purification and desalination.
Mr. Hadar holds an MBA from Stanford University and is an experienced programmer and economist.